Meet the experienced and friendly doctors and staff who make Lakeway Eye Center the leading provider of vision care products and services in Lakeway.

Dr. El-Hitamy grew up in the Texas panhandle town of Amarillo. He graduated from The University of Texas at Austin and moved back to Austin after receiving his Doctor of Optometry degree from the University of Houston College of Optometry. He opened Lakeway Eye Center to provide quality eyecare to the Lake Travis area in June of 2001. He married Shelley, in September 2002 at Vintage Villas overlooking beautiful Lake Travis. His son Logan was born in 2006 and daughter Lila in September of 2009. Dr. El-Hitamy enjoys reading, traveling and spending time with his family. 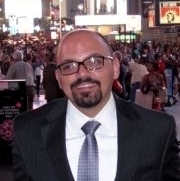 Grant was born and raised in a state Dorothy called home before migrating to Oklahoma where the buffalo don’t roam. After graduating with honors from Ruidoso High in 2002, Grant left the mountains of New Mexico for the hills of central Texas to try something new.
Grant’s experience in customer service expands from country club member services to managing a men’s retail store before stumbling upon the eye care industry in late 2012. Shortly after, he earned his Paraoptometric certification.
Grant prefers to watch educational videos instead of reading in his free time. Also, he learned how to play the guitar at age 14 and has written dozens of songs over the years. Today, he spends more time creating electronic music on his computer.

Paula is a native Austinite. She graduated from St. Edwards University in 1991 with a BA in Marketing and Communication. She worked in Human Resources for 10 years.
After taking some time to raise her daughter, Paula has joined our team. She loves working with people and helping them choose the best frames to fit their lifestyle and to make them feel and look great.
Paula enjoys traveling, boating and listening to live music. She lives in Lakeway with her husband and daughter.

You can schedule your next eye exam with us online!